The "Kajaki" (ang. Canoe) mural dedicated to Wanda Telakowska was painted on the wall of a tenement house at ul. Panieńska 3 in the Old Praga district of Praga Północ in Warsaw. The mural was created at the beginning of 2018 and its author is Radek Skrzypczyk. The mural is a copy of the "Kajaki" woodcut (also known as "Sport and Nature") from 1932, painted by the founder of the Institute of Industrial Design - Wanda Telakowska. The woodcut was awarded at the International Exhibition of Art and Technology in Paris in 1936 and was featured on the cover of the pre-war guide "Polish Waterways" by Antoni Heinrich.

Wanda Telakowska is known primarily as the organizer of Polish industrial design, the creator and longtime director of the Institute of Industrial Design in Warsaw. In the 1930s, the author was one of the main representatives of the color woodcut. In the years 1923-1931, she studied painting and graphics at the Academy of Fine Arts in Warsaw and as a creator of woodcuts, she won a number of awards at international exhibitions, incl. gold medal at the Graphic Exhibition in Florence in 1934. Unfortunately, she lost most of her artistic output during the Warsaw Uprising, and after the war she did not return to artistic activity and devoted herself entirely to industrial design.

Most of Wanda Telakowska's graphic works have a cheerful, holiday mood. The artist's favourite motif was nature. She is particularly fond of the subject of water sports - sailboats and kayaks appear in her works several times and are always a pretext to show a landscape with a river, marina or bay. 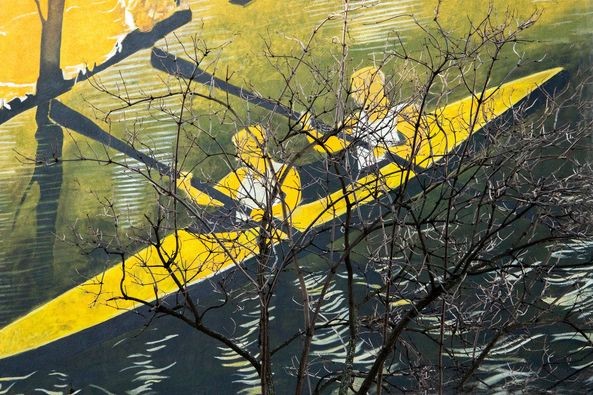